Below is some of the recent media coverage the firm has received. Please check back often as we will update this page periodically in the future. 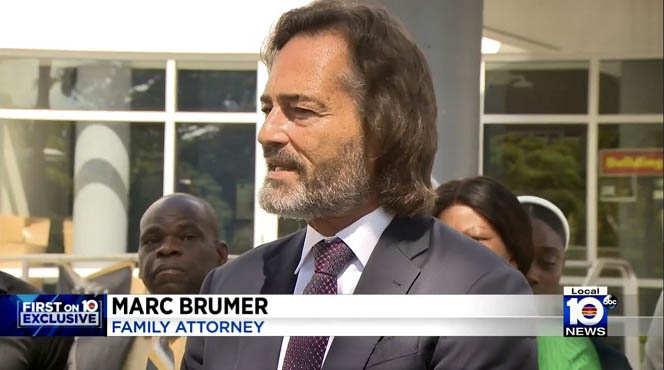 A City of Miami Beach employee died last week after drowning in a public pool on the last day of summer camp, in view of children who gathered for the day's festivities. After taking him off life support following nine days in the hospital, his family wants answers as to the strange circumstances of his death.
Read The Miami New Times Story »

ABC affiliate WPLG reported exclusively on the near-death experience of a South Florida woman who was served what's being called a "toxic cocktail," a potentially deadly libation fused with liquid nitrogen.
Watch The Video »

60-year-old Marie Jean Pierre was fired from her dishwashing position at a Miami Hotel after she missed work on Sundays for religious reasons. She had been an employee at the Conrad Hotel for more than a decade before her termination in March 2016.
Read The Story »

Marc Brumer of Brumer & Brumer in Miami and R. Martin Saenz of Saenz & Anderson in Aventura convinced a federal jury to award $21.5 million to devout Christian and former hotel dishwasher Marie Jean Pierre, after she was fired from the Conrad Miami Hotel for refusing to work Sundays.
Read The Story »
See The Print Version »

A Florida woman was awarded $21.5 million after a jury found that the Miami hotel that employed her did not honor her religious beliefs by continuously scheduling her for Sunday work and then firing her. Marie Jean Pierre, who used to work as a dishwasher at the Conrad Miami, sued Park Hotels & Resorts for violating the Civil Rights Act in 2017. The 60-year-old claimed the hotel chain, formally called Hilton Worldwide, continued to schedule her for Sundays despite knowing she was a missionary.
Read The Story »

A 60-year-old dishwasher has been awarded $21.5 million in damages by a federal jury in a lawsuit against Hilton hotels over continuously scheduling the religious woman to work on Sundays, before ultimately firing her.
Read The Story »

A jury has awarded Marie Jean Pierre $21.5 million, finding that her boss violated the devout Christian's religious rights by repeatedly scheduling her to work on Sundays and ultimately firing her.
Watch The Story »

A jury in Miami decided Tuesday a hotel dishwasher should be awarded $21.5 million in damages after her workplace continuously scheduled her to work Sundays, infringing on her religious rights.
Read The Story »

For nearly a decade, Marie Jean Pierre showed up to work as a dishwasher at the Conrad Hotel in Miami's posh, high-rise-filled Brickell neighborhood. The Haitian immigrant claimed she informed the hotel from the time she was hired, in April 2006, that she could not work on Sundays because she was a missionary for the Soldiers of Christ Church.
Read The Story »

Dishwasher awarded $21.5M for being forced to work on Sundays (New York Post )

She used the Chick-fil-A defense. A hotel dishwasher was awarded $21.5 million this week after she managed to convince a Miami jury that her employer had violated her religious rights -- by making her work on Sundays.
Read The Story »

A federal jury found that the Conrad Hotel in Brickell retaliated against a religious dishwasher by firing her for being unable to work on Sundays, and awarded her $21.5 million.
Read The Story »

A jury has awarded a Miami hotel dishwasher $21.5 million, concluding that her employer failed to honor her religious beliefs by repeatedly scheduling her on Sundays and ultimately firing her.
Read The Story »

A former dishwasher at a Miami hotel, fired after missing work on Sundays for religious reasons, was awarded a $21 million jury verdict. Sixty-year-old Marie Jean Pierre was a dishwasher at the Conrad Miami Hotel for more than a decade until she was fired in March 2016.
Watch The Story »

The firm has filed a wrongful death lawsuit in West Palm Beach on behalf of a 25-year-old man who is grieving the loss of his mother, who was senselessly gunned down after her son was wrongfully targeted by the management company of his apartment complex.
See The Video »

A woman whose leg was fractured when she was struck by a car in a crosswalk at Northwest 36th Street and Second Avenue was awarded $667,991.
Go To The Story »

A three-week jury trial has been scheduled for this fall in Miami-Dade County in which Marc Brumer is seeking compensation after a toxic cocktail sent philantrhopist Barbara Kaufman into intensive care for two weeks.
Go To The Story »

The right half of a so-called Chinatown bus's front windshield shattered last year when it fatally hit a pedestrian on its way to Norfolk from New York. And the driver's reaction? Keep driving, according to a lawsuit.
Go To The Story »

The firm's lawsuit against the Miami Beach Botanical Gardens was recently featured in Medical Daily, which also took a look at another victim of a similar dangerous libation -- as well as an alarming continued use of liquid nitrogen in drinks at restaurants and other culinary venues.
Read The Article »

Marc and his family took time out of their Thanksgiving Holiday festivities to assist handing out turkeys to the less fortunate in Hialeah.

The family of a man whose memorial Friday night was the lightning rod for a shooting spree outside a northeast Miami-Dade funeral home that left two dead and 12 injured apologized to those who were struck down by bullets Monday.
Go To The Story »

This article appeared in The New York Post on Friday, June 18, 2010. Adobe Reader must be installed on your computer in order to view the file.
Go To The Story »

The father of Cape Coral police officer Damien Garcia has filed a lawsuit on behalf of his son following a 2009 traffic crash in which Garcia was critically injured.
Go To The Story »

Diamond seller seeks $1.1 million from his insurer, which says he staged heist at his shop.
Go To The Story »

Marc Brumer Hired In Suit Against Lloyds Of London

This article appeared in The Los Angeles Times on Thursday, September 28, 2006. Adobe Reader must be installed on your computer in order to view the file.
Go To The Story »

This article appeared in Verdict Search in January 2004. Adobe Reader must be installed on your computer in order to view the file.
Go To The Story »

This article appeared in The Law Reporter in February, 2003. Adobe Reader must be installed on your computer in order to view the file.
Go To The Story »

This article appeared in The Fort Lauderdale Sun-Sentinel on October 11, 2003. Adobe Reader must be installed on your computer in order to view the file.
Go To The Story »

Kindly complete the short form that appears below and a member of Brumer Law will contact you within one business day. If your matter is urgent, please call our office directly.


Notice
Nothing whatsoever on this website constitutes an attorney-client relationship, as all such agreements must be forged in writing between you and The Law Office Of Brumer & Brumer. Our office focuses its practice on personal injury law in Miami and throughout South Florida, specifically car accidents, medical malpractice, slip-and-falls, insurance bad faith cases, wrongful death, and dog bites.

The Law Offices Of Brumer & Brumer offers free, friendly, no-obligation initial consultations. We accept every Miami personal injury case on a no-cost, no-fee basis if there is no monetary award. Call us today if you or a loved one has been injured or affected by an accident that was the fault of a negligent third-party.

Disclaimer
No portion of this website may be reproduced, redistributed, retransmitted, or otherwise copied, in part or in whole, without written permission from The Law Offices Of Brumer & Brumer.